UNDER NIGHT IN-BIRTH Exe:Late[st] is
OUT NOW!

PQube (London, UK) February 9, 2018 – PQube is excited to announce that the critically acclaimed fighting game by Arc System Works and French Bread, UNDER NIGHT IN-BIRTH Exe:Late[st], is OUT NOW for PlayStation 4, PlayStation 3 and PlayStation Vita!

UNDER NIGHT IN-BIRTH Exe:Late[st] is the exciting new fighting game franchise by developer French Bread, creators of Melty Blood, the classic fighting game that’s been a staple of Japanese arcades for years, and is often considered the missing link between traditional 2D fighter gameplay and the over-the-top craziness of ‘anime’ fighters.

aking place in a fictional modern-day Japan, UNDER-NIGHT IN-BIRTH Exe:Late[st] presents a world where a mysterious event called Hollow Night occurs and spreads terror on a monthly basis. During the Hollow Night, shadowy creatures called Voids appear and attack innocent people from the shadows. Survivors of these attacks sometimes develop special abilities and become known as an In-Birth. The story of UNDER-NIGHT IN-BIRTH Exe:Late[st] follows these gifted individuals as they come to grips with their new powers, deal with the horrors of the Hollow Night, and encounter shadowy organizations who have their own plans regarding the mysterious events and the terrible creatures it spawns. 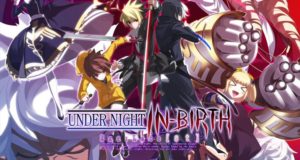 Per approfondire:
Under Night In-Birth Exe:Late[st]